On 7th and 8th February 2018, the EUSALP Executive Board held its first meeting under the Tyrolean presidency. Drawing on the lessons learned from the first Annual Forum in Munich, the Executive Board members started to prepare the second Annual Forum, which will take place on 20th and 21st November 2018 in Innsbruck. Further subjects covered were the candidacies of Italy and France to assume the next presidencies, the issue of embedding EUSALP in EU financial programs, the state of play of the already launched Alpine Region Preparatory Action Fund (ARPAF) projects and the challenge of communicating EUSALP.

From the Tyrolean Presidency

We have committed ourselves to our goals, which will be dealt with the individual action groups of EUSALP. The Tyrolean presidency gives special attention to several key areas: How can we ensure sustainable transport across the Alps? What advantages can dual training have for the education of our younger generations, particularly in rural areas? Issues such as those dealing with natural disasters (especially with regard to disaster management) or regarding the energy of the future- are also on our agenda.

The Tyrolean chairmanship wants to involve not only politicians but also the general public. The aim is to inspire as many people as possible to take an active part in shaping a liveable Alpine region. As part of our annual “Future Day”, specific EUSALP projects were presented to the general public recently. The annual forum in November will also make the thematic scope of the EUSALP visible.

Read a summary of the work priorities.

Our thanks go to all partner countries and regions as well as the European Commission for their excellent active collaboration. 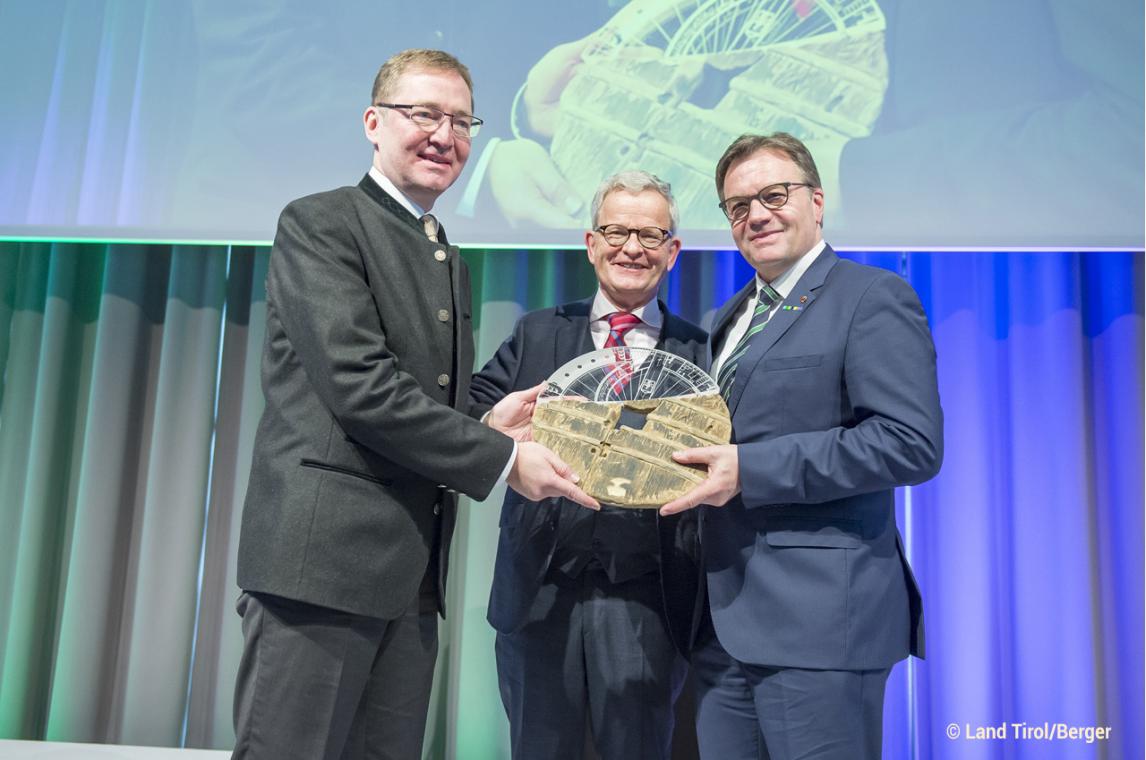 Michael Hinterdobler, head of the department for Europe in the Bavarian State Chancellery, together with Walter Deffaa from the European Commission, presented the 2018 EUSALP president, state governor Günther Platter, with the “KOLO WHEEL”, which is a symbol of the movement within the Alpine region. 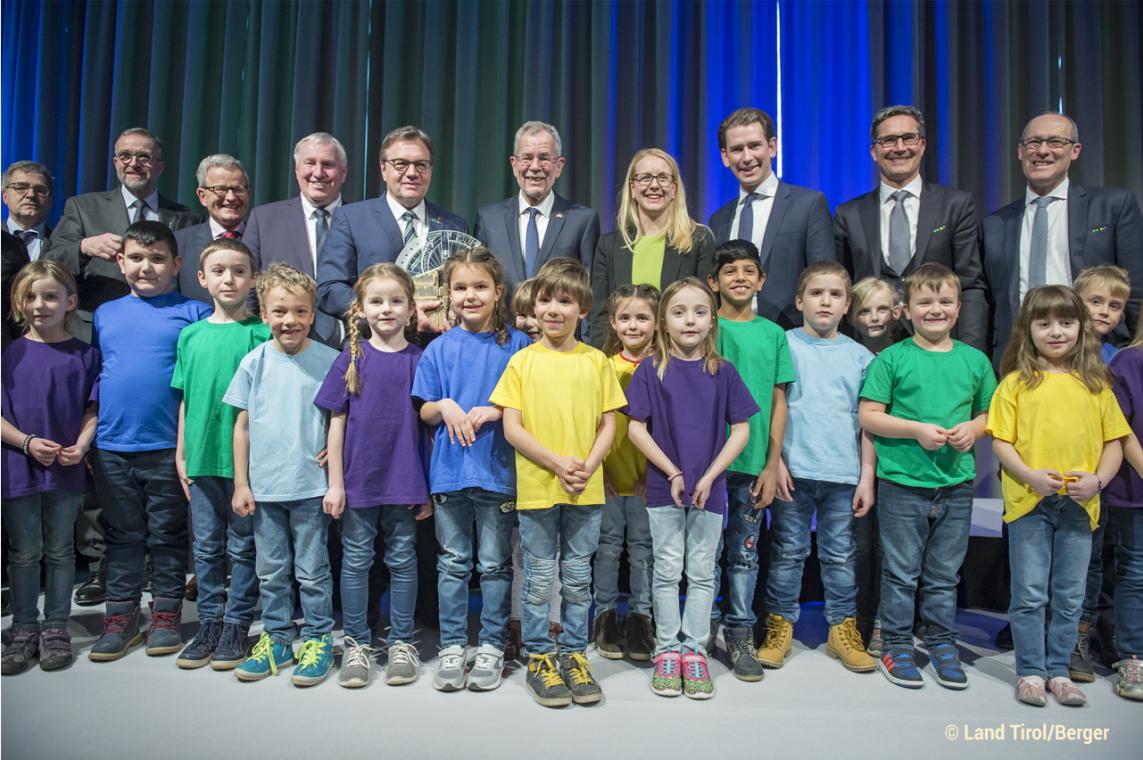 The Tyrolean presidency wants to get young people involved in accordance with the motto “shaping.future.together.”

The Platform of Knowledge is now online! 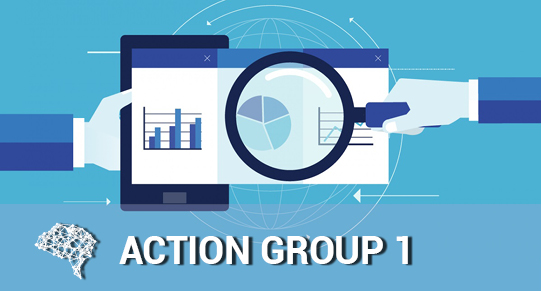 Many tools to better explore and know everything about EUSALP are available in the PoK!

In January 2018, the AlpGov Project started the activity of “Mapping governance in the research and innovation field”. The study analyses regional strategies, highlighting synergies between ESI Funds and other EU policies and instruments and specifically investigates the role of local policies and how they enhance innovation throughout the Alpine area regional eco-systems (Scagliarini, 2018).

Moreover, AG1 EU Programs Staff have produced a Report on the financial instruments for R&I at national level, “State of art” of funding instruments at National level, where the level of innovation among EUSALP Member States related to the European Innovation Scoreboard is analyzed. The report includes data on investiments in research and innovation together with funding Programmes and resources available within each EUSALP State. For each programme a fiche has been created with the details of all relevant open calls.

Good News from Brussels! With a budget of 100 billion euro for the next Framework Programme for Research and Innovation (FP9) the Commission has taken an important step in the right direction for the EU budget of the future (2021-2027).

In March, Commission President Juncker openly dreamt of a budget of 160 bn euro for FP9, which is rumoured to be called “Horizon Europe” 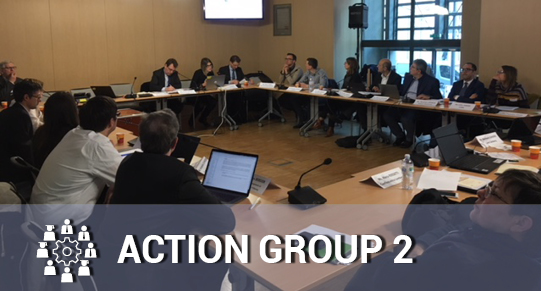 The project “Triple Wood”, developed within the framework of Action Group 2, is going to start its implementation. The project with partners and observers from 5 member states covering 15 regions, aims at showing the ecologic, economic and social benefits of using wood for buildings and timber constructions. An exhibition will show best practices from all EUSALP countries in combination with seminars on a “road show” through the partner countries. The project is co-financed by the European Parliament (Alpine Region Preparatory Action Fund).

The projects CirculAlps, TransAlp and HEALPS (supported by Action Group 2 and co-financed by ARPAF) are already running and were presented during the last meeting of the Action Group on 1st February 2018 in Lyon.

The next Action Group meeting will take place on 18th September 2018 in Stuttgart. More information here. 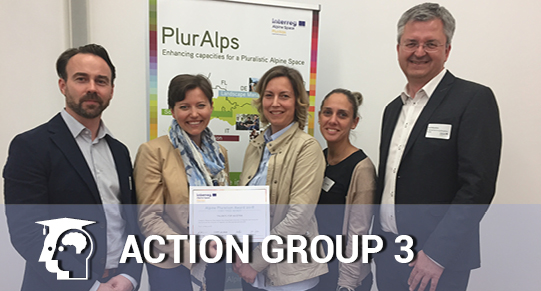 In the frame of the Alpine Space project PlurAlps on the 16th May in Turin the results of the Alpine Pluralism Award were announced. Aim of the award is to help to make visible recently started and ongoing activities in the Alpine Space that regard integration of migrants in the local societies, to increase public awareness and provide inspiration for others to replicate these practices.

The 4th category that collected  “Measures for school/work transition of migrants” was proposed and evaluated in accordance with the Action Group 3. The winner of this category is the  project “Talents from Austria” of the  Institute for Talent Development from Styria. Professionals and volunteers run a boarding school with job training & placement for unaccompanied minor asylum seekers.

The Alpine Pluralism Award is actively supported by the Tyrolean Presidency of EUSALP and for the winners of the 4 categories a money price was offered by Land Tyrol. 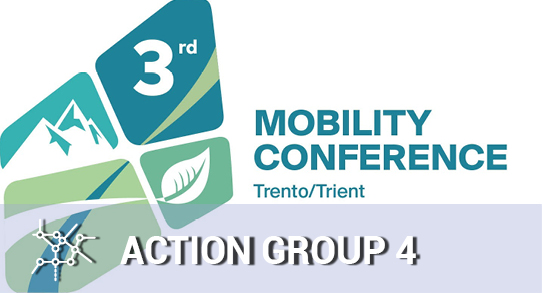 The European Region Tyrol-South Tyrol-Trentino as AG4 Leader is organizing the 3rd edition of the EUSALP AG4 Mobility Conference on 20th June 2018 in Trento.

The focus of this year’s conference is on Secondary Networks, with the aim to deepen the discussion on the connection of secondary networks whilst favoring environmental sustainability as well as supporting the economic and social development also in remote Alpine areas. Secondary networks are crucial in connecting territories of the Alpine Region to the corridors of the Trans-European Transport Network (TEN-T) and thus to contribute to the effectiveness and efficiency of the core network. In this light, the 3rd EUSALP AG4 Mobility Conference aims to identify and discuss innovative approaches for the Alpine Region. More information and registration.

Strengthening coordination and developing cooperation and greater integration between the existing bodies and structures in the field of transport and mobility is one of the main objectives of the AG4. The annual Mobility Conference provides the opportunity to enhance greater dialogue, to support substantial coordination across all decision-making levels as well as to build up close links with actors other than just public administrations and bodies to ensure legitimacy as well as engagement and ownership of the Alpine strategy.

AG5’s digitalizing the Alps strategic initiatives are on track 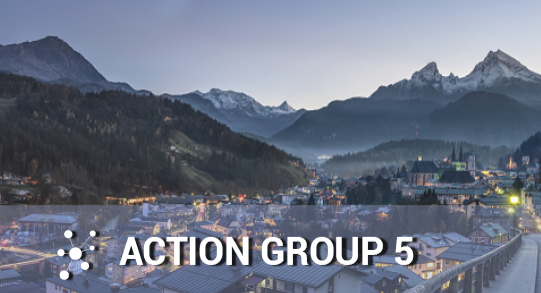 The second funded strategic initiative is the project on Smart villages. The project was selected for funding on the 3rd call of Alpine Space Program in April 2018.

AG5-Co-Leader SAB is also Lead-partner of this project and therewith assures the link to the macroregional strategy.  The project will run for 3 years and the first meeting  will take place on the 11th and 12th June 2018 in Maribor. As parallel event, the AG5, in collaboration with the University of Valle d'Aosta, organizes a round table on Smart Villages and Digital connectivity in the Alps which will take place on Friday the 8th June in Bard (AO) – Italy. The third strategic initiative is a feasibility study for a fibre optics backbone in the Alps. The results from a survey will be presented in a meeting of Subgroup 1 of AG5 in Bard in connection with the above mentioned meeting. Further discussions and clarifications have also taken place on the 3D landscape model initiative, promoted by Bavaria. A formal decision to go ahead with this initiative will have to be taken on a political level.

Dealing with the access to services of general interest, the Subgroup 2 of AG5 relies mainly on the ongoing Alpine space program project Intesi (penultimate meeting in Carinthia on the 3rd and 4th of July). The findings of the project will then be presented at the final conference on 9th of October 2018 in Innsbruck to a larger public, followed on the 10th of October by a Ministerial conference on the intermediate results of AG5.

The work of AG5 so far shows clearly, how the more strategic approach of the macroregional strategy and the more project orientated approach of the Alpine space program can be interlinked to a mutual benefit. 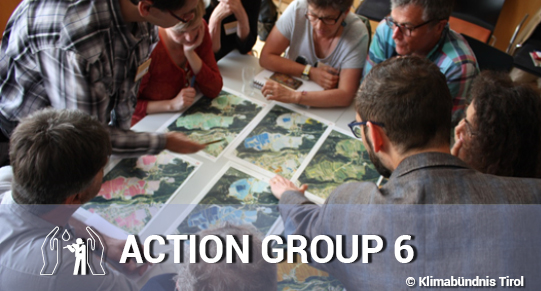 AG6 and its three sub-groups (SG), spatial development and soil conservation, farming and forestry and sustainable water management, have worked considerably on the implementation of the AG6 work plan.

During the SG1 kick-off of the awareness raising series on 17th April 2018 in Innsbruck, representatives of municipalities and planning offices as well as interested citizens had the opportunity to discuss the various aspects of soil conservation and spatial development. Additional events are planned in Italy, Germany and Slovenia.

SG1 focused also on a declaration on intelligent land use and soil protection, which will be presented on 31st May 2018 in Klausen, back-to-back to the Annual Conference of Plattform Land South Tyrol.

SG2 members are currently involved in the implementation of the two ARPAF projects AlpJobs and CirculAlps, developed within AG6.

SG3 is working on the preparation of its session at the Forum Alpinum in June 2018 in Breitenwang, where the preliminary results on the topics of green infrastructure for a sustainable water management and water-demand and supply management in case of regional droughts will be presented.

Green Infrastructure – An European Movement, «I’m In! – Are You?» 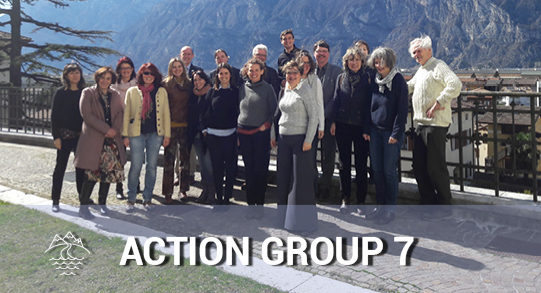 Looking back to the launch conference in 2016 ecological connectivity was a rather unknown topic. Recognized at the bottom, the concept needed visibility and support at the high level and across the territory. This has been achieved with activities of AG7 members in 2017 such as the Declaration on Alpine Green Infrastructure (till now supported by 27 regions) and results of Networking Workshop organized within Mediterranean Coast and MRS Week. Growing political support is encouraging for many project ideas – implementation initiatives (short Im-In) – discussed within the Action Group meetings and workshops in Munich, Koper, Trento and Innsbruck. The ideas are to be supported by different programs (Alpine Space Program, Adrion) and strong alliance is needed among regions and different sectors for successful implementation, so AG7 will continue with the discussion on relevant ideas while connecting actors that want to be engaged.

Inspired by the AG7 approach, the European Conference of European Regions (ENCORE) aims at preparing a political declaration to trigger closer cooperation among EU regions and specifically among the four EU Macro-regional Strategies in the field of Green Infrastructure, as ecosystem services is one of the core topics in 2018 under Danish ENCORE chair.

Do you want to join the Implementation Initiative Movement? «I’m In! – Are You?»

Find out more about our mission, results and planned activities on EUSALP web page and join us.

The 5th meeting of EUSALP AG8 took place on the 12th and the 13th April 2018 in Piran, Slovenia. Exploring the karst landscape the meeting started with an excursion to the Škocjan caves and a rockfall protection measure. After an opening session elaborated in detail to organizational and informative matters results of various studies were presented and discussed. The group intensively discussed recommendations on residual risks, which are in the final stage before publication.

In the context of the Tyrolean Presidency AG8 planned various implementation initiatives for regional and local stakeholders:

The geographic and structural characteristics of the Alps provide good potentials to turn the EUSALP territory into a European “Model region for energy efficiency and renewable energy”. But where does the energy transition in the Alpine macro-region stand now?

On the 2nd of October 2018, representatives from politics, research&science, energy suppliers, associations, NGOs and civil society will discuss which steps are needed to support the energy transition in the Alps. The 2nd EUSALP Energy Conference will offer workshops and exhibit hands-on projects that are co-financed by the Alpine Space Programme to trigger exchange and the transfer of expertise amongst the participants.

The event is organized by EUSALP Action Group 9 and under the patronage of the Tyrolean EUSALP Presidency 2018.

The detailed programme is online and registration is open here.